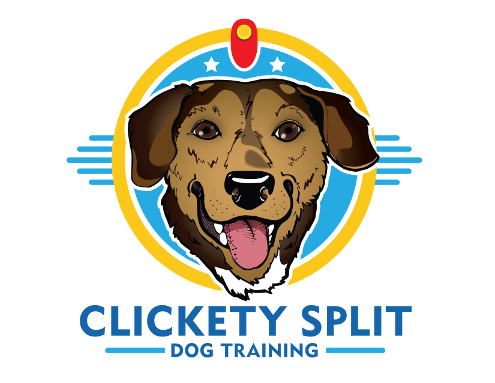 “The Best Surfer Out There Is The One Having The Most Fun”. Duke Kahanamoku 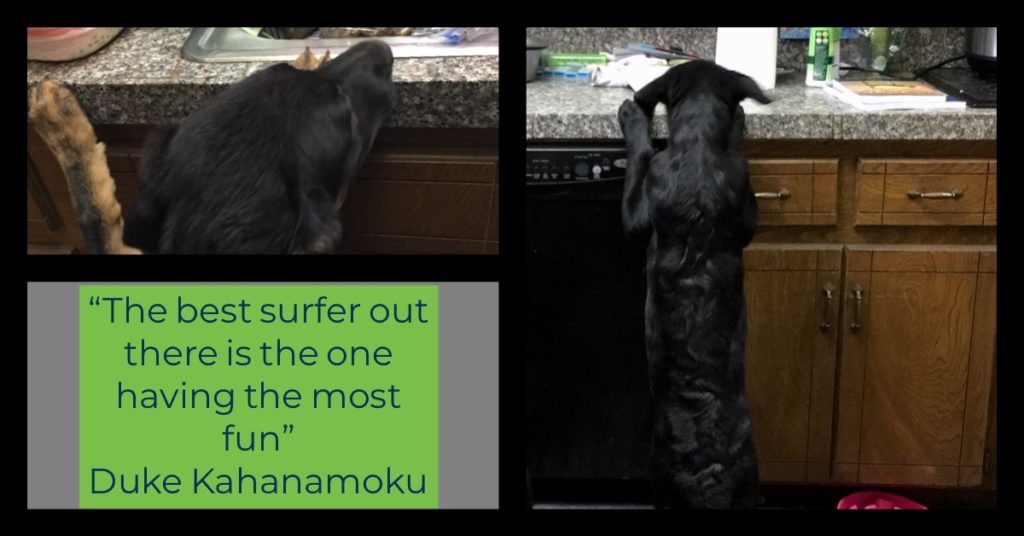 Let’s face it, counter surfing is fun, that’s why dogs do it.

I knew I had wasted my money on the Scat Mat when I awoke in the middle of the night to find my Doberman, Crusher, standing on the Scat Mat, on the kitchen counter, playing in water from the kitchen sink he had turned on full blast.

The Scat Mat, a plastic mat designed to deliver an unpleasant but not harmful shock when touched, certainly hadn’t been the first device I had purchased to try to stop Crusher’s counter surfing habit, I had started with mouse traps, then something called a Snappy Trainer (that snapped and made a loud noise when touched) before investing in the Scat Mat.

All in my arms race to keep Crusher, a very tall and athletic red Doberman, from stealing things from, or standing on, my counters.  But the more stuff I bought, the more clever Crusher got.

I thought about Crusher 20 years later when I was called to the home of a very nice family with a beautiful German Shorthaired Pointer.   While Buck was not the first GSP I had worked with for counter surfing, his case reminding me of how I had struggled with Crusher.

The first thing I noticed was the Scat Mats, at least 5 in the kitchen alone.    These had “helped a little” but I was told what they were best at was shocking the children, Buck meanwhile would simply stand on them, or drag them off the counter.

The second thing I noticed was Buck was hiding from me under the large dining room table, and wearing an electronic collar, and not a cheap one, that was used to give him a painful shock when he leapt onto counters (or even the top of the refrigerator!) to steal food or items.    A trainer had recommended it, and sold it to them, when Scat Mats hadn’t helped.

Very quickly Buck learned not to counter surf when an adult was nearby, but he continued to grab stuff when the children were in the room.

So, Buck continued to counter surf, and the owners had been told to buy and install a “Buck Cam” in every room of the house so they could watch him, and zap him from another room.

This was all getting very expensive, overwhelming, and upsetting.  Buck was afraid of the collar and was starting to hide when the trainer came over, or when the family would try to put the collar on him, and then whenever someone would reach for him.  He was actually getting better at counter surfing and “not getting caught” and he was becoming immune to the lower levels of shock, and the family felt bad about using more painful shocks.  Soon, the trainer had told them, they might need to add another, stronger, “stubborn dog” collar.

Bucks owners felt sad, overwhelmed, and frustrated all at once.

That’s when I was asked to consult, referred by a family friend after I work with their dog.

But unlike when I struggled with Crusher all those years ago, I had learned much more effective ways to change behaviors. 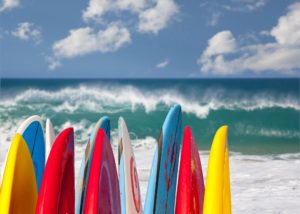 First, we started by looking at the function of the surfing behavior.    Buck was a healthy, adult, sporting breed, designed by breeders to spend long days searching for hidden birds.  He loved to hunt!   The German Shorthair is a breed also favored by law enforcement for detection work, so strong is their desire to work and joy in finding things.

Part of Bucks love of counter surfing was how hard it became for him to “win” by finding something.   As the family made it more difficult, Buck just worked harder.   This became Bucks primary mental and physical exercise.   That is was difficult just made it more reinforcing.

He wasn’t getting enough exercise for his age and breed, and he had few opportunities to really run and sniff.  Because the previous trainer had them walking Buck “at heel” he never got a chance to run, or sniff, or look for things.

This made the counter surfing the ONLY such outlet he had, and boy was he willing to work hard at it!

So we talked long and hard about the function of this behavior for Buck, and in that conversation we found a very effective solution for his behavior.

A solution I was using with my own adolescent German Shepherds, and one that didn’t involve shocking him, or scat mats, but instead using his natural instincts, and his toys and meals, to meet his need in a more desirable way.   This was less work, much less money, and far more effective.   I only saw Buck 4 times, before the family declared their problem resolved.   How different from the months of struggle I had with Crusher twenty years before. 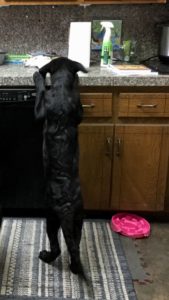 Puppy Oberon’s first experiment with counter surfing. If he finds something fun, this behavior will be reinforced!

Here is the plan I designed for Buck. It’s one I’ve used many times since, including with my own dogs.

1. Provide things to “discover” on the floor.

Take up, launder/clean, and rotate toys and chews.  Place the “new” ones the dog hasn’t seen in a week or so along floorboards, partially hidden under dog beds or furniture with just a bit sticking out, so the dog can “look” for where I might have hidden things.  When he finds them, we make a big deal out of that and play with the toy a bit.   Basically make the dog a “floor surfer”.  We often hide food around too, again, using the same surprise learning that teaches dogs to seek things from counters, but from the floor instead.

2. Encourage Floor Surfing for meals too!

I do the same with “stuffed” food toys like Kongs and Shank bones using a portion of the daily ration in this manner.

3. Food “hunting” games: Use your imagination!

One of these is as simple has tossing kibble into the yard for the dog to find, another hiding piles of kibble behind bushes and trees in the yard, a third, a kibble trait that leads across the yard to a stuffed kong.

4. Keep counters clean, and things picked up, to control what learning occurs.  If dogs occasionally find treasures and food within reach on the counter, they become counter gamblers, always willing to bet they will find something up there.   This is especially important during adolescence, when young dogs are learning new things, and are just getting tall enough to reach the counters.   Less important for older dogs who have never learned to take things from the counters.

When my dog does pick up an unacceptable item I call him to me and we go together to the kitchen to trade it for cheese.

First, this prevented him from tearing up the item, OR, learning to run away from me, because he would bring me the item right away.  Two big problems prevented.

Second, it helped me remember to keep my stuff up.

Thirdly, once he started bringing  me other things (like the toys I have hidden around the house) I started using high value treats (like cheese) ONLY for dog toys my dog brought  me, and kibble for “not toy”.  After a bit of that, maybe a week or two, I stopped using any treats for “not toy” using only praise, and cheese (or toy play) for toys he brought.

Dogs will do the math!   Bringing toys = Cheese!  Not toy = Boring.

The old switcharoo.   Now he’s on my side, he’s rejected non toy items as dull, and accepted toy items as interesting and reinforcing.

I tricked him a bit, and made what I want him to do “his” idea and also what he wants.

At this point all I need to do to maintain this is provide interesting toys in interesting ways, and play fetch with him when he brings me a toy.

Instead of worrying about “heel” or “polite walking” allow dogs to sniff and explore on walks.   I bought a 15 foot lead for this purpose, and learned how to manage it.   I now encourage Rambo to sniff and stroll on walks.    I give him about 20 minutes of this type of activity before we walk rapidly (for my exercise) for another 30 minutes, and we end with a 10 minute stroll again.     I even toss a few treats into high grass or dense bushes, to encourage him to really sniff and hunt for them.

7. Odor Based Games and Tricks.

This doesn’t have to be formal scent work or a tracking classes (but it could be!) it could be any type of trick or training involving odor.   For Buck, the older children started teaching him odor detection tricks with a drop of vanilla extract and paper cups, for Rambo we found he really loved doing “box searches” for hidden food or toys.

8. Ditch the boring bowl and make the most of meals.

Instead rotate among kibble dispensers (like Kibble Nibble), Puzzle Toys (choose safe ones), Stuffed items (like Kongs, Squirrel Dudes, Tux, etc), kibble trails/hides in the yard, and etc for most meals.

I’m not talking about running dogs on treadmills until they are too tired to do anything, but I am talking about being responsible for the breed of dog you have chosen and it’s exercise requirements.    Buck’s family had underestimated how important it was for him to run and explore new environments.   We added a weekly nature hike (on a long line) to his daily walk schedule, and daily walks were varied too, often driving Buck to a different local neighborhood to walk instead of just around the same familiar block.    Buck’s dad installed a trail app, and chose a different local trail every week.  No more “always the same” walk for Buck.

10. Training:   Really the only “training”  used was teaching Attention, we add distractions such as stuff on a counter, floor, and in children’s hands and reinforce the dog for ignoring such items.   But training is a form of mental exercise and important for every dog.

Now, if all this sounds like a lot of work……

Buck and my Rambo are of high energy breeds and they are healthy adults, providing adequate exercise is part of the deal we make when we choose to live with such dogs.   Ignoring those needs leads to undesirable behaviors as dogs seek outlets for their insticts, trying to fix the behavior, without addressing the unmet needs is a waste of time and energy (and money).

But not all dogs need the same amount of exercise as a healthy young German Shepherd or German Shorthair, adjust this plan to meet your dogs unique needs.

Mix and match the protocol, it’s designed so that you can easily choose one technique per week, more or less, depending on what works for your dog.

Lower energy dogs, older dogs, will need less time and work, but they are also less likely to counter surf than bored young adults.   So tailor your plan to your dogs needs!   Mix it up!

In the end, Buck stopped stealing items off the counters, and became a much happier and less anxious dog once his needs were met, and his family began to enjoy him as the clever and joyful dog he was.

I’ve used this plan with great success with my current teenager in training Rambo, and as a preventive with many other budding surfers, focusing them on floor surfing instead of battling counter surfing.   You can too, I hope this plan helps someone avoid the frustration I experienced with Crusher, who tried to teach me these lessons all those years ago, but I wasn’t ready to learn then.

Want to learn more?  Check out this episode of Elite Pet Podcast with Susanne on the subject of counter surfing.

Do you have a counter surfer?  We can help, just Contact Us to schedule a consultation in Tulsa or Sand Springs.  Distance consultations are also available.